My name is Rana Darwish. I was born in Cairo and emigrated to Toronto with my family in 1994. You could say that initial move sparked my desire to see the world.

In my twenties, I took a step out of my comfort zone. I moved to Miami, Florida. Without knowing a single person in the entire state and $900 in my purse, I embarked on a new adventure. Between bartending and freelance personal training, I had a rather comfortable lifestyle in the sunny city. In the two years I was there I managed to pay off my student loans! I made a community of life long friends. I even learned a bit of Spanish! Once I felt like I conquered Miami, I packed up and headed back to Toronto.

Shortly after my stint in Miami, I got a job as a flight attendant at a major North American carrier. I went back to school with the intention of learning French. I learned the basics, but by no means was I proficient enough to carry a conversation.

Can you guess what happened next? I moved to France! Is there a better way to learn the language than from its natives? French food, culture, fashion and lifestyle were an attractive bonus! So, off to Nice I went. Being a flight attendant allowed me the freedom to live just about anywhere in the world without having to worry about finding a job or getting a visa! I fly roughly 9-12 days per month and earn a full time salary! Some of my colleagues live in Jordan, Israel, Luxembourg and even Hong Kong.
One of my passions in life is equestrian sport. I am a trained show jumper. While in France, I got back into riding but as you can imagine, horseback riding in the French Riviera was not cheap! After mastering the French language, I jetted off to Southern Illinois. I googled horseback riding vacations and found a ranch that doubled as a bed and breakfast. I emailed the owner and negotiated a favourable rate for a long term stay.

I learned Western style riding from two lovely ladies with over 35 years of experience. They even taught me how to break a horse and train it to be ridden by just about
anyone.

A couple of years later, I found myself in a comfortable spot once again. So, being me, I went back to Toronto to dream up my next great adventure.

Shortly after, my airline started non-stop service to Dubai. I worked the inaugural flight. Anyone who travels often, can tell you that every city has its own vibe or feel. I fell in love with the feeling of being in Dubai immediately. I felt like there was so much to explore. Being a young country, The United Arab Emirates offered a wealth of untapped potential. 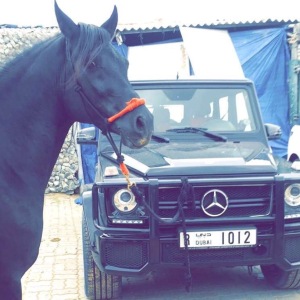 A few months later I got recruited by an internationally renowned hotel chain to do corporate sales. The company found my language skills an incredible asset. I speak fluent Arabic, English and French. Seeing as they sent the entire team to Paris for three months every year, I was an attractive candidate.

I took a leave of absence from my job at the airline, and off to Dubai I went. I’ve fallen in love with the city, the country and it seems the perfect mix of Arab culture with a Western twist. The UAE has a huge equestrian community. It is also centrally located and Dubai International Airport is one of the busiest in the world.  I can be in China or Europe in 8 hours.

It is the only place I have ever felt at home. When I visit Egypt, I am considered foreigner. In Canada, I am considered an immigrant. In Dubai I feel like I can be me, an Arab with a western twist!

Dubai is one of seven emirates that make up the United Arab Emirates. The others are, Abu Dhabi (the capital), Sharjah, Fujeirah, Ras Al Khaima, Ajman and Um Al Quwain.
Each Emirate has its laws, and its ruler.

The UAE is a part of the GCC (Gulf Countries Coalition) you can think of this like the European Union, but the Arab version. The GCC also includes: Saudi Arabia, Qatar, Kuwait, Baharain and The Sultanate of Oman.

Currency: The official currency is the Emirati Dirham. One Canadian dollar is equivalent to roughly 2.74 AED.
%d bloggers like this: